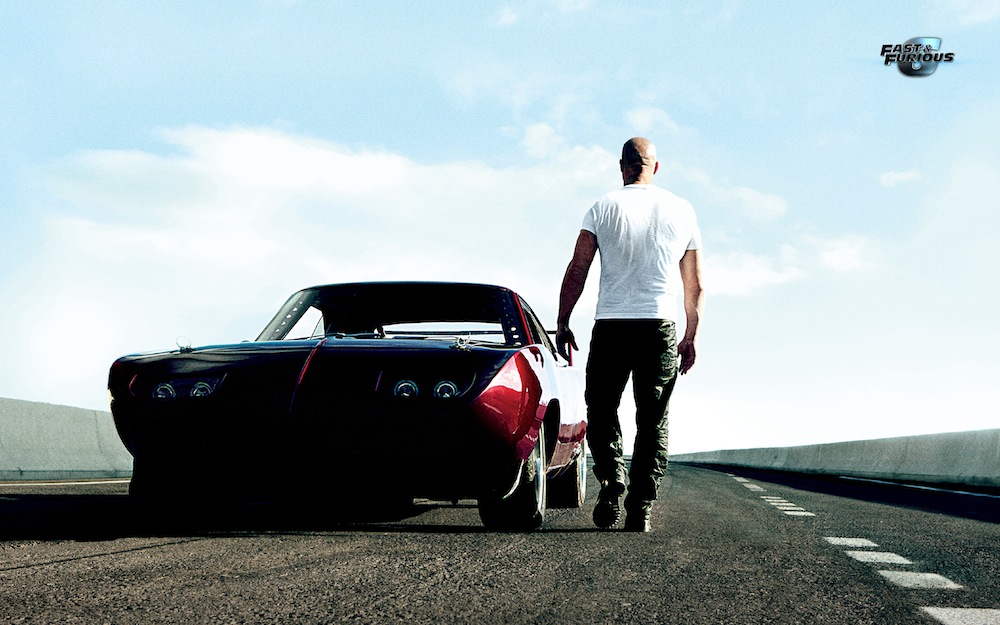 Title begins with a flashback of the series – one, two, drifts away from three, four, five…Aha! Are we in for a treat or what?

Calvin Hobbes finds the non-hiding Cornetto to letty him know…Ooops, am giving away too much here.

Villain I think is from Gujarat. One Mr. Shah. He was working for Batman earlier. Good with building batmobiles. Hobbes does a superman on the batmobile too, from one bridge to another, mother promise.

Old team comes back, full funny talk. With lines like, “You don’t turn your back on family even if they do”, there is little scope for any gangsta talk like it used to. Half the time you are like “aaaaaaawwwww”. Roman Pierces with his wit, but that’s about it.

Then suddenly Letty and Gina (ya marna) starts punching each other. Woman on woman, handcuffs…It was nice for a while you know. And just before the interval they draga brag into… wait, sorry, it’s the other way around. They drag Braga into the movie.

Second half defies the laws of physics, chemistry and common sense. Most characters seem to have taken in to IPL’s theme song – Jumpin japang. Cars crushing, flying, exploding, a truck somersault, a tank being anchored by one of those crushed cars – Lin and Murugan (The writer from Cuddalore) were making sure they burned every penny Universal Studios unknowingly agreed to pay.

Cornetto flying across a bridge to save the memory-erased Letty – even Rajani saar must’ve been like “Yennada geli panriya?”.

Mr Shah arrested, Letty back in the team, Hobbes recovers some billion dollar VIP suitcase that could’ve potentially killed thousands, ladies and gentlemen – we have a happy ending.

Meow is held hostage, Gina joins wrong team, Shah goes into a big cargo plane, into a runaway that runs – as Lalettan would put it – kilometers and kilometers; the action was just beginning to unfold.

Cars and Batmobile aimlessly fighting, climbing and exiting the plane, shooting, punching, scratching (oh, that was just me), pilots trying to take off for the last 20 minutes, one WWF style double team (One could only see biceps in that shot, about 25 of them I think), almost all the cars now hanging on the plane weighing it down and not letting it take off, one poor chap getting fried in one of the engines, yabbaaaaaa.

Anyway, finally the plane says I’ve had enough and explodes. Guess what, the cool Cornetto is still inside. No worries, comes out like Shivajinagar in Terminator. I mean that was after how he came out like…phew! Let me catch a breath here. If you still want to go watch it, stop reading this and go.

Ok fine, after much hugs everyone’s like what’s up han? As in the chinese dude Han man. Focus people. Don’t lose the plot now.

Everyone but Han is happy and Hobbes is like name your price (for recovering the VIP suitcase back). The answer – 1327. You’d expect Mr Diesel to say stuff like “A hundred million” or “Bora bora”. Nope it was just 1327. I am ashamed to make a co-relation here to my Black pearl’s number plate. I know, I know that was irrelevant. So, was the entire friggin movie. Gimme a break will ya?

That’s it man, back to peaceful family lunch, say grace, eat food, drink some beer (after some really sad dialogues between Pataki and Letty like “you keep him” “No, you keep him”). Oh wait, talking about beer, looks like Mr Mallya had some bad deal going here. All the labels on the bottles are blurred. Most definitely the case of KF not paying royalty. Pakka.

And, we finally have a happy ending folks. (everyone was happy that the movie ended).

Enter Mr Transporter to entice us to watch Fast 7. “You dont know me, you are about to”.
Guruvayurappaaa rakshikane!

You must be thinking what was I on when I wrote this no? Ditto ditto how I felt about Mr. Lin making this movie.

For those who’s already seen this movie, my condolences. For those who haven’t, I just saved you couple of hours. Buy me a beer.