Alright, the title could’ve also been “…Android/Samsung survivor”.
Last chirstmas, I gave away my iPhone, the very next day…eeeesh! Yup, my experience has been as bad as that song.
I got myself a Samsung Galaxy Note 2 after losing my iPhone in a cab. While I was impressed with the 5.5 inch screen size, everything else seemed like a compromise.

So, here are my top 10 reasons to go back to an iPhone after surviving this wannabe smartphone device for exactly 4 months.

Be it Twitter, Facebook or any other terribly designed app, had to deal with it crashing time and again. Not something I was used to, with the previous two iPhones I had.

After just couple of months, the OS used to kinda warn me about not being able to read my 32GB sandisk card. Until, one day it decided to destroy it completely. Losing all data and completely rewriting the file system. The card being so tiny, I can’t even use it as a paper weight.

One not-so-fine morning, the massive 5.5 inch screen wouldn’t go to sleep unless I manually locked it. Tried the usual suspects of rebooting, looking for a software update, banging it on the ground…Only to find out much later that it had decided on its own to change the screen timeout from 30 seconds to 10 minutes. On the ‘brighter side’, when it happened the second and the third time, I went straight to the setting to change it back to 30 seconds without wasting any time. 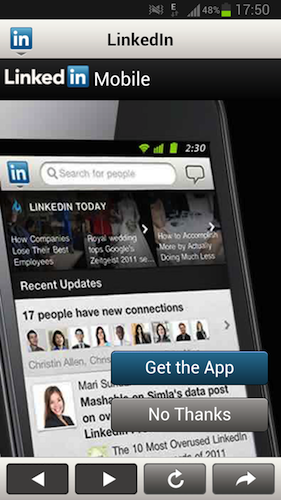 With my limited experience in the app development space last year, I clearly saw the difference in getting an app approved on Play store and the App store. While I have had Apple rejecting apps for things like the UI being not up to the mark, Play store would approve absolutely anything within 5 days of uploading it. As a result, you get classic errors like the LinkedIn app asking you to download the app within the app.

Oh boy, where do I begin explaining the absolutely badly designed native apps. The top one here being the mail application. I really want to know if anyone has ever used it. You have? You are a minority sir. The native apps were so bad that I needed a replacement app for most of it – The Gmail app, Contacts+ and Google calendar to name a few. Yeah, I mean, Google calendar right? Beats me too.

If you take a look at the top free apps on Play store, you will wonder what is worse – the store itself or its users. <sarcasm> I tried to blur this image for sensitive users </sarcasm>, but don’t miss 41, 44 and 48 in this list. There are at least 8 such apps in the top 100.

The number of samsung services that run in the background is astonishing. Why pack so much of junk when the user may not need any of it? Despite some 1.6 gigs quad core with 2GB RAM, the response time of the interface wasn’t even matching upto the first generation iPhone I had 5 years ago.

I don’t get the deal of a Samsung App store, really. And of course, apps by other manufacturers. Multiple logins, multiple services, multiple updates, you are sure to feel like this one day.

9. Cannot beat Retina in the sunlight.

Super AMOLED = Super flop in the sunlight. The display cannot match upto the outstanding Retina display especially when you are out in the sun. The plot darkens, I mean thinkens if you are wearing shades.

Do you think I’d wanna be associated with something as gut-wrenching as this?

Bottom line to my ‘I hate Apple’ cult, here’s my parting line. While your android can “oooh, it can do this, aaaah, it can do that”, iOS does what it should, well. Period. (There’s an app for that).